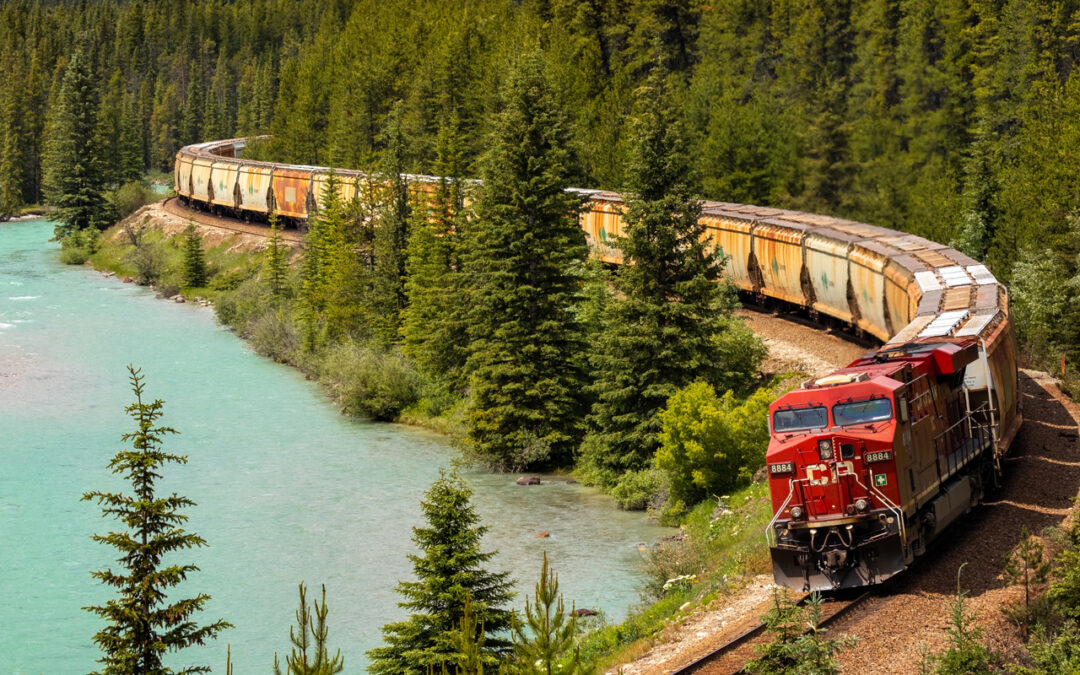 The first four months of 2022 saw intermodal rail service in Southern California fall to a record low as BNSF and Union Pacific railroads were forced to meter Southern Californian rail services to relieve inland congestion. From 2019 to 2021, rail shares gradually dropped from 67.9% in 2019 to 56.8% last year. However, the drop in rail shares accelerated between January and April this year, landing at a record low of 40.8% provided by the Alameda Corridor Transportation Authority (ACTA).

The number of trains serving Southern California’s largest port has also dropped from 33 per day on average to just 27 a day in June. The sharp drop in rail service is having additional effects on the port of Los Angeles-Long Beach, increasing the average truck turn time in the port from 82 minutes in June to 86 minutes in July. The knock-on effects of insufficient rail services remind shippers to pay attention to port operational capacity as the year’s peak shipping season approaches.

Southern California’s rail service is metered partly to avoid overloading inland rail hubs, such as in Chicago, where import containers are not picked up fast enough by shippers. Ocean carriers are also partly to blame for creating the current situation, though, as many in the past year have alternated between encouraging and then discouraging IPI (Inland Point Intermodal) bookings on the Pacific market to quickly turn containers around to then transport them back to Asia.

US Imports Predicted to Slow Down for Second Half of 2022

US retailers expect import levels to slow down in the second half of 2022 compared with the previous year by 1.5%, with further declines predicted for 2023 as the American economy slows. According to Global Port Tracker (GPT), August imports will drop 3% year-over-year, while September imports will increase by approximately 0.3% before falling 3.9% in October, 2.7% in November, and 3% in December year-over-year.

Despite the gradual drop in import figures for the second half of 2022, GPT predicts that as a whole, 2022 will have a 2% higher import volume compared with the record-breaking 2021 as many retailers placed orders much earlier to prevent merchandise arriving late due to supply chain bottlenecks and disruptions earlier in the year.

Additionally, consumer spending and retail sales will likely increase for the remainder of the year by between 6% and 8% compared with 2021, sustaining the trend seen in the first half of the year, where spending increased by 7% year-over-year.

Spot rates in the trans-Pacific market have now fallen lower than contract rates, pushing US importers to appeal to ocean carriers and ask for contract rates that more accurately reflect the current market. Before the COVID pandemic, this was a standard practice between shippers and carriers. But as spot rate prices rose drastically in 2020 and 2021 due to pandemic-related congestion and bottlenecks, shippers have not had to dialogue with carriers as frequently.

Previously, most carriers complied with shipper contract rate adjustments to keep up with supply and demand. However, shippers are now seeing mixed results. Some carriers predict spot market rates will rise again thanks to the peak season, additional port and supply chain congestion, and blank sailings.

Before the pandemic, midstream contract rate adjustments were more often beneficial to shippers and ports, while carriers experienced losses. Capacity and equipment shortages, which increased spot market and eventually contract rates, turned the tables in favor of carriers instead, pushing the Federal Maritime Commission to make significant legislative changes and regulatory reforms to support the US economy in the face of rising prices.

There are several different approaches that carriers and shippers are now taking when responding to midstream contract rates negotiations and adjustments. Some shippers are using alternatives such as the New York Shipping Exchange (NYSHEX), which creates mutual, non-performance contracts with a low 2% default rate. Some carriers, such as Maersk, are avoiding taking advantage of higher rates to secure long-term customers who will utilize the full range of their end-to-end services. Others again are attempting to leave midstream adjustments behind, instead relying on index-linked contracts based on the Baltic Exchange, Xeneta, and the Shanghai Shipping Exchange.

Truckers who call into the port of Los Angeles-Long Beach are asking the FMC to take action regarding restrictions on returning empty containers. The current restrictions are having a knock-on effect, increasing the cost to shippers while simultaneously worsening port congestion.

Chief executive of the Harbor Trucking Association Matt Schrap addressed both the FMC and the Biden administration in a letter describing the difficulties that truckers on the West Coast faced since the creation of container alliances a few years ago. Schrap outlined in the letter that approximately 87,000 empty containers are sitting at the port and near-dock depots, while additional containers sit in trucker yards throughout Southern California, impacting both port and trucking efficiency.

Some of the problems caused by the empty container restrictions include last-minute notices that the port cannot take an empty, even when it is already en route and challenges in securing appointments for delivering empties. Motor carriers must then find storage space, either through using their own or renting, until empties can successfully be delivered without the means to recover the additional expense from carriers or the port. Truckers may also face additional per-diem fees when a container is not delivered, taking up administrative time to prove that they could not do so. At the same time, shippers can be charged demurrage fees if their empty container cannot be taken off a rail chassis.

Labor and Parts Shortage Could Extend US Chassis Shortage into 2024

US chassis manufacturers are struggling to source raw materials and retain workers for a second year, indicating that chassis shortages throughout the US will likely continue until at least 2024. The main cause of the chassis shortage has been the overwhelming surge in US containerized imports, which reached over 2,3 million TEU 21 out of the 24 months between August 2020 and July 2022. Before the pandemic, import rates only rose over 2.3 million TEU once in October 2018.

Frontloaded retail orders, slower turnaround times, and shippers holding on to chassis equipment for longer are also contributing to the current shortage. US lessors and equipment pools have already placed orders with both domestic and foreign manufacturers for as many as 50,000 marine chassis. However, the amount that will be delivered by the end of the year will be significantly less. This year’s orders will finish arriving in 2023, while next year’s orders won’t arrive until 2024.

Manufacturers rely on between 20 and 30 different parts to construct a chassis, all of which come from different suppliers and can cause delays when a single supplier is behind schedule. Additionally, the cyclical nature of the chassis manufacturing industry has caused many new and experienced workers to leave rather than face being laid off should the industry enter a downturn.

Photo by Andy Holmes on Unsplash