Take a Look at the Record-breaking Port Congestion From 10,000 Feet Above, As 70 Hulking Cargo Ships Park Off the LA Coast 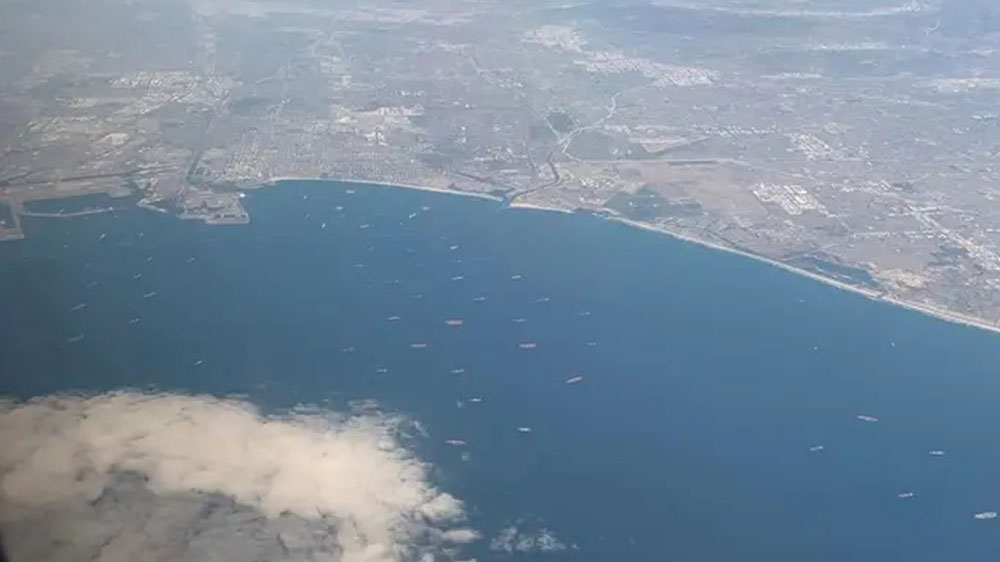 From above they might look like colorful specks in the distance, but the cargo ships floating off the coast of Southern California represent a massive bottleneck for the global supply chain.

On Monday, 97 hulking cargo ships were at Los Angeles and Long Beach ports. At the time, 70 of the container ships were at anchor or in drift areas waiting for space to open up in the port, according to the Marine Exchange of Southern California.

On Sunday, when Sam Kirschner snapped a photo from his plane window — over 10,000 feet above the shore — the Southern California ports had just finished a week in which they had hit a new ship-backlog record every day, as the queue lengthened by 10 ships.

The aerial view of the scene from Sunday captures the magnitude of the situation, as ships wait over a week to dock and unload, turning the coast into a type of parking lot for vessels that can be worth over $100 million and weigh over 200,000 tons.

Before the pandemic, the ports typically had zero or one ship waiting to dock, according to Kip Louttit, the executive director of the Marine Exchange of Southern California.

Earlier this year, Louttit told Insider the sheer size of the ships has only made the issue worse.

“Part of the problem is the ships are double or triple the size of the ships we were seeing 10 or 15 years ago,” Louttit told Insider. “They take longer to unload. You need more trucks, more trains, more warehouses to put the cargo.”

Another Twitter user also took a photo of the scene from above.

The massive backlog has become a spectacle of sorts in California. Insider’s Brittany Chang captured images of the port congestion in April, when 21 boats waited to dock.

At the time, the cargo boats were readily visible from the shore, but it was nowhere near the levels of congestion the port is seeing now.

Earlier this year, the backlog showed signs of abating, after hitting a record high in February 2020, when the onset of the pandemic and panic-buying wreaked havoc on global supply chains. But last month the ports began to beat out February’s record, as COVID-19 shutdowns and a labor shortage met a boom in demand from e-commerce and preparation for the holiday shopping season.

Several Twitter users have also captured photos of the recent congestion from nearby beaches.